Lake Saimaa from its birth to the present day

The basis for the Saimaa landscape was born at the bottom of an ancient sea over 1,900 million years ago. Clay, silt and mud deposited at the bottom of the sea to form later mica gneiss and related rocks. 1,885 million years ago a collision of lithospheric plates formed an ancient mountain range, at the foundations of which the seabed sediments metamorphosed into mica gneiss and veined gneiss. The granite rocks of the Saimaa region formed 1,830 to 1,800 million years ago. During that time, hundreds of cubic kilometres of granite magma crystallised slowly deep in the foundations of the mountain range to form coarse-grained granite. As time passed, the mountain range wore down and is now sand on the shores of Lake Saimaa. The fragmented remainders of the mountain range can still be seen in the landscape as a colourful mosaic of water, rock and fertile ground.

Salpausselkä ridges can be seen from space

Approximately 11,000 years ago, the southern part of Saimaa separated from other waters and was an independent body of water. Remnants of the last Ice Age are the massive ice-marginal formations, the Salpausselkä ridges, which formed approximately 12,300-11,600 years ago and are even visible from space. The land that was pushed down by the ice sheet is still rising and gradually altering the shorelines. The incline of the land can still be seen in ancient forests and mires that remain on the bottom of Lake Saimaa.

Vuoksi, the great current, was born from an ancient natural disaster

Originally the waters of Saimaa drained into the Gulf of Bothnia. The land that was released from under the ice sheet rose quicker in the Gulf of Bothnia and the land started to lean towards South-East Finland. In Saimaa, the waters flooded against the Salpausselkä ridges and approximately 5,700 years ago the spectacular ice-marginal formation of Salpausselkä broke. As a result, Saimaa flowed as a wide torrent onto the dry lands. The Vuoksi, Saimaa’s effluent river, was born.

These days the Vuoksi, which flows into Lake Ladoga, is the largest river in Finland in terms of volume.

A legacy of the isolation brought about by the Ice Age are the endemic species of Lake Saimaa that cannot be seen anywhere else in the world. There are approx. 430 of the likeable Saimaa ringed seals (Pusa hispida saimensis) left. If you are lucky, you may see the jovial seal laying on a rock and basking in the sun. Two of the fish species, the landlocked salmon (Salmo salar m. sebago) and the Arctic char (Salvelinus alpinus), are local and critically endangered.

The shores have been inhabited since prehistoric times

Humans arrived in Saimaa over 10,000 years ago. Great waters for fishing and land for hunting attracted people to this new area that had been revealed from under the ice. The most popular settlement spots were near the sunny beaches. People painted dozens of rock paintings on cliffs and rocks, with the most common subjects being people, animals and boats. The paintings tell us about the world of the ancient hunters of Saimaa.

Saimaa is at the border between east and west

During the Second World War, a 1,200 kilometre-long defence zone, called Salpalinja, was built in Finland. It was one of the strongest defensive positions of the war. The most densely fortified area was Saimaa, where defences can still be seen on the shores and islands. With the Moscow Peace Treaty (1940), Finland’s eastern border shifted and part of the Vuoksi River and the waterway connection from Saimaa via the Saimaa Canal to the sea remained on the Soviet side of the border. These days Finland leases the Saimaa Canal from Russia.

The ancient waterway is still in use

The waters of Saimaa have acted as an important transport route since prehistoric times. They have made it possible to transport raw material for the needs of the wood processing industry, which is very important for Finland. Saimaa still has active commercial traffic that consists of cargo carriers and cruise ships. The Saimaa Canal offers an aquatic connection to the Gulf of Finland, apart from a couple of months in the winter when the canal freezes. In the summertime, towboats transporting timber and log rafts hundreds of metres in length can be seen slowly floating towards paper mills.

A good place for people

Living the life of an islander has a strong cultural meaning in Saimaa. Cities and small villages grew up near the water. Bridges and ferry boats connect those that live in the fragmented archipelago. Life in the countryside relies on agriculture, forestry and the service industry. Some of the residents work in the cities in the area and in the summer they might commute by boat. Ring cold winters, you can take a short cut across the lake via an ice road.

Saimaa is a popular holiday destination. All year round, summer cottages, waterways and forests offer a wide range of opportunities for relaxing and experiencing new things in the middle of the countryside, while still remaining close to the city.

The Saimaa Geopark area took about a thousand years to free itself from the ice sheet. The area was part of the ancient lake and sea phases of the Baltic Sea before it became an independent lake basin. Around 11,000 years ago, the water level in southern Lake Saimaa was much lower than today, but uneven land uplift and the resulting tilting of the crust to the south-east, together with the northern position of the first estuary, contributed to coastal flooding. Lake Saimaa was at its widest during the Suur-Saimaa phase. The eruption of River Vuoksi 5,700 years ago changed the course of Lake Saimaa's development. The water level dropped by a few metres and River Vuoksi began to regulate the development of Lake Saimaa and the lake landscape of Eastern Finland. For today's hikers, the multi-phase history of Lake Saimaa can be seen in the form of raised beaches of different altitudes.

The First and the Second Salpausselkä were deposited at the margin of the continental ice sheet that remained at the same area between 12,300-12,100 and 11,800-11,600 years ago. At that time meltwaters from the ice sheet flowed into the Baltic Ice Lake. The outlet channel to the ocean was located at the present-day Straits of Denmark. 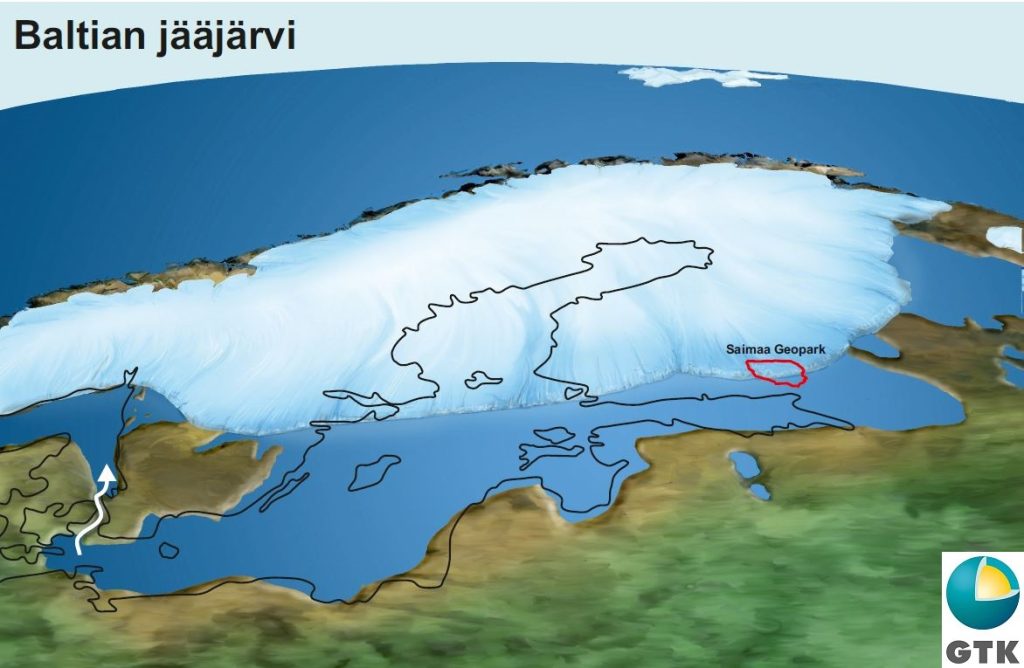 A sea connection from the Baltic Ice Lake to the ocean opened via central Sweden approximately 11,590 years ago. The water level dropped 26-28 metres and saline waters flooded into the Baltic basin where the next stage, Yoldia Sea started. After the drop of the water level of the Baltic Ice Lake there were local ice lakes in the Saimaa area. That phase lasted a couple of centuries. The Yoldia Sea spread to the Geopark area as narrow bays until c. 11,400 years ago. 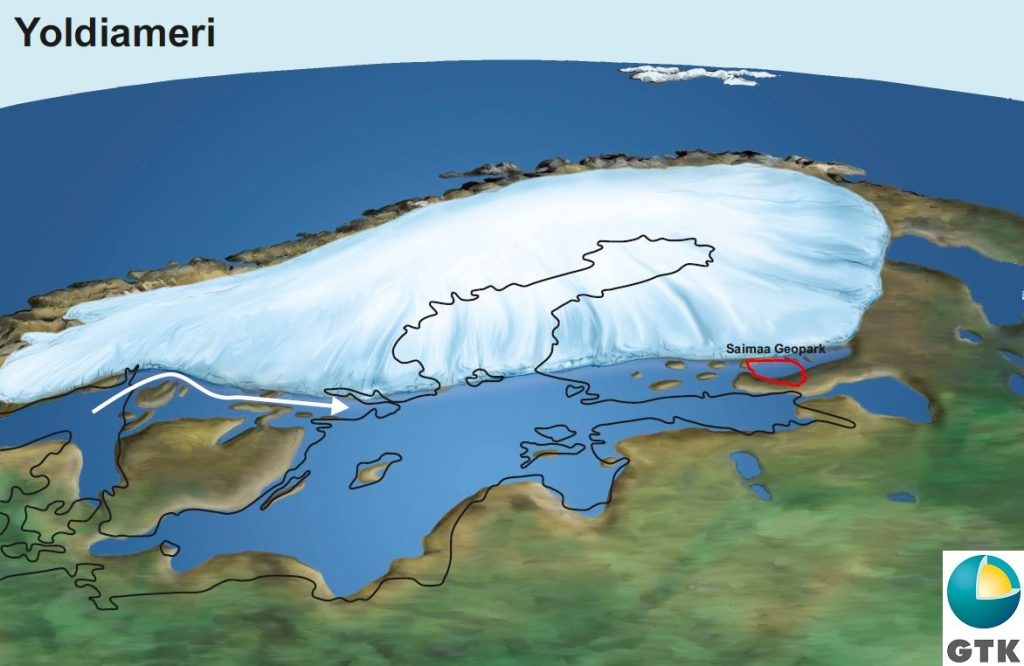 From Yoldia Sea to Ancylus Lake

Because of the land uplifting the Yoldia Sea became isolated from the ocean approximately 10,700 years ago. The next stage in the Baltic basin was Ancylus Lake. The first outlet channel of Ancylus Lake (A) shifted from central Sweden to the location of present-day Straits of Denmark (B) over 10,000 years ago. 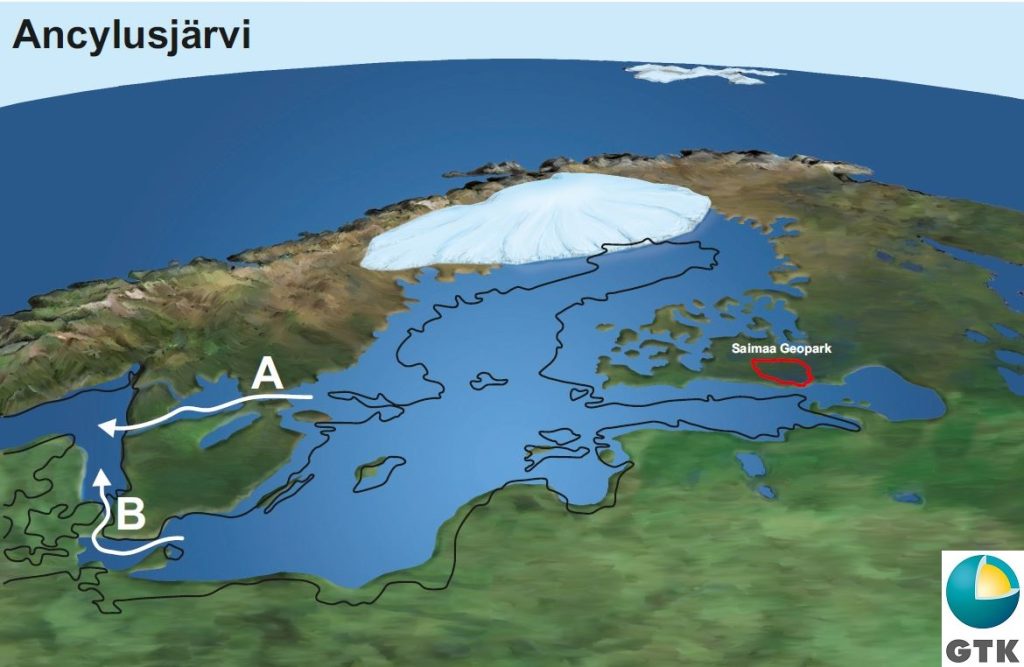 Approximately 9,000 years ago the ocean level was so high due to the meltwaters from the northern hemisphere glaciers that saline waters flooded through the Straits of Denmark into Ancylus Lake. In the Baltic basin, the Litorina Sea stage started. The Litorina Sea didn´t reach Saimaa. 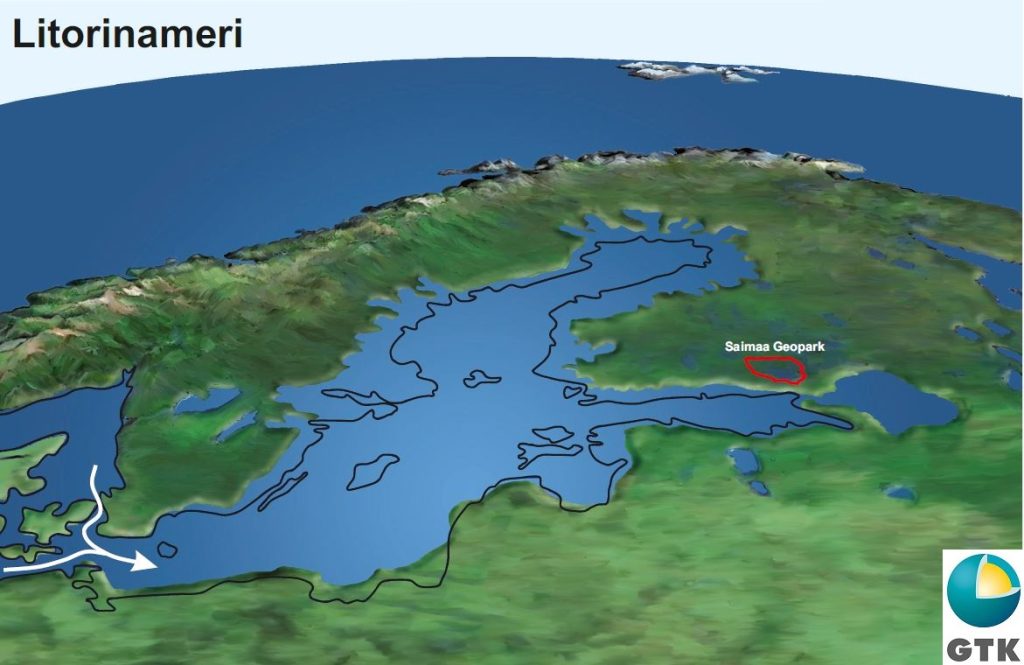